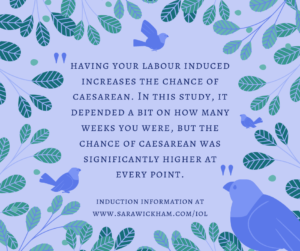 Over the years, I have shared a number of studies showing that induction increases the chance of caesarean. A 2021 study has again reinforced our knowledge in this area.

In real world settings – and I’ll explain what that means in a moment – healthy women are more likely to end up having a caesarean if they have induction of labour. That’s compared to going into labour on their own.

The study I’m discussing today is by Levine et al (2021). It’s published in the European Journal of Obstetrics & Gynecology and Reproductive Biology. The authors begin their paper by expressing concerns about high caesarean rates.

“The rate at which cesarean deliveries are performed has continued to rise in these past couple of decades, for which many have expressed concern. The reason for this concern lies in the associated maternal morbidity that has been seen with cesarean delivery.” (Levine et al 2021)

In order to investigate this question, the authors undertook a retrospective observational cohort study. That means they looked back at the birth records of healthy women who had given birth at their hospital over a number of years. That’s what we mean by “real world” research. It looks at what actually happened in reality, and not just what happens in the ideal setting of a research study. There are pros and cons for looking at both. But one of the problems with trials is that they don’t always reflect what happens in the real world. This is a big problem with induction. Midwives, birth supporters, some doctors and others who work in childbirth are well aware of the reality. Having your labour induced means a higher chance of a caesarean. But there are trials which have found the opposite. More on that below.

The researchers in this study focused on healthy women without risk factors. The abbreviation NSTV in the quote below stands for ‘nulliparous term singleton vertex-presenting.’ Nulliparous means women who were having their first baby. They were also at full term, with just one baby (not twins or multiples) and the baby was head down. This specific group was studied because it removes some of the women who might be more likely to be told they need a caesarean. That might be, for instance, because their baby is breech or because they are ‘post-dates.’ Those groups are of course important to study. They just weren’t the focus of this piece of research.

What did they find?

The results showed that:

“There was a total of 16,044 deliveries during the time of this investigation, and 5,997 of those were NTSV. 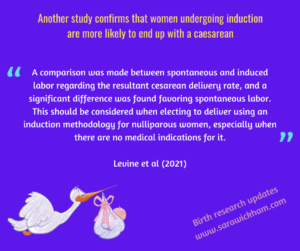 But let me break the numbers down a bit for those who aren’t so used to reading research findings.

17.9% (about one in five) of the women who went into labour on their own at 39 weeks had a caesarean.

33.8% (one in three) of the women whose labour was induced at 39 weeks had a caesarean.

18.9% (about one in five) of the women who went into labour on their own at 40 weeks had a caesarean.

35.8% (just over one in three) of the women whose labour was induced at 40 weeks had a caesarean.

38.7% (nearly two in five) of the women whose labour was induced at 41 weeks had a caesarean.

The authors also conclude that women who waited to go into labour naturally didn’t have poorer outcomes than those whose labours were induced. They noted, though, that there is an advantage to spontaneous labour, because caesareans can lead to more problems. Some of these problems can affect the next birth.

“Awaiting the natural onset of labor, if there are no maternal or fetal reasons to intervene, may yield no worse a perinatal outcome than an earlier induction of labor. The consequences of a cesarean delivery are known to be associated with immediate and longer-term maternal morbidity, and this may be potentially avoided, if elective inductions of labor can be minimized.” (Levine et al 2021)

So why is that?

One reason is that the participants in the ARRIVE trial were not representative of all women. Another is that they had very medicalised care. And, as Levine et al (2021) themselves note, there’s a difference between what happens in the setting of a trial, and in the real world.

It’s really important that we don’t take evidence at face value. We need to dig a bit deeper and explore what’s going on. Whether there are things that could have affected the findings. Whether it’s possible that what we see in the environment of a trial is the same as we would see in the real world. In trials, people are often on their “best behaviour.” They may be following a protocol that doesn’t exist in real world practice. There are actually tens of reasons that might explain the discrepancy.

What’s important is that people know that the discrepancy exists.

That just because there’s evidence to support an idea, that doesn’t mean it’s right. It doesn’t mean that there aren’t other perspectives.

Most importantly of all, it’s important to know that there are pros and cons to everything. Induction of labour is absolutely the right decision for some woman and families, regardless of an increased chance of caesarean. And it’s absolutely not right for others. The key is in getting informed, and figuring out what’s right for you.

If you’re a midwife or birth worker and you’d like to better understand the issues and develop your confidence with research, I often look at induction and related topics in my online courses.

And as always, if you’d like to be among the first to hear my thoughts on new studies and to get updates about my work, new birth-related research and thinking, make sure you’re subscribed to our free newsletter list, which means you’ll get our monthly Birth Information Update and details of my current projects

2 comments for “Induction increases the chance of caesarean”