The stork is well loved as an image associated with birth and midwives; a good number of midwifery practices in the English-speaking world feature the word in their name, and images of the birds often appear on logos and web sites. Many midwives still use the expression ‘stork marks’ rather than the medical term naevi for the temporary red marks (apparently left by the stork’s beak) which some babies have on their face or neck at birth. But I wonder how many midwives know that the question of whether babies are brought by storks or created by meetings of eggs and sperms has been under heated discussion in some areas?

The debate about the theory of the stork raged – albeit a bit less fiercely – alongside the related arguments about whether Creationist theories should be taught alongside Darwinist theories (and vice versa). It appears to have been proliferated by one of those emails that we receive, laugh at and then forward mercilessly: the email claimed that, while it was a scientifically established fact that storks do exist, we do not have absolute proof of all of the things which are written in biology textbooks about human reproduction, and so therefore the theory of the stork should be taught in schools alongside the theory of human reproduction. Which, if you really think about the tentative nature of scientific theories, perhaps doesn’t seem that unreasonable… 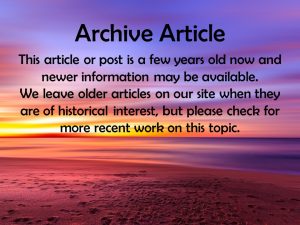 I don’t remember being told as a child that babies were brought by storks, but, along with many other midwives, I really like both the idea and the mental images this story creates. Some of the possible reasons for the propagation of this story include the observation that white storks tend to return to Northern Europe in the Spring – about the same time that the babies conceived during midsummer weddings are born – and the relatively unusual devotion of storks to their former nesting sites and mating partners.

The theory of the stork recently appeared to have found some scientific support in a piece of research by Hofer et al (2004), who showed a correlation between the increase in the stork population around the German state of Lower Saxony and the increase in home births in the same area. (Interestingly, they found no correlation between the numbers of hospital births and the numbers of storks). However, these researchers were making a serious point.  It turns out that they wrote their article as,

“…an example of how studies based on popular belief and unsubstantiated theory, seconded by low quality references and supported by coincidental statistical association could lead to apparent scientific endorsement” (Hofer et al 2004: 88).

While the part of me that likes the theory of the stork hates to admit it, I suppose they have a point. It is a similar point to the one that Marjorie Tew (1986) once made when she investigated the data around place of birth, and showed that there was no relationship between the increase in hospital birth and the reduction in perinatal mortality which occurred during the same years. Even when two things appear to be linked, our perception of that link might not actually stand up to scrutiny. 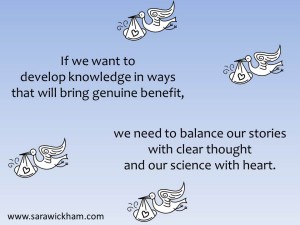 Yet finding possible correlations, or relationships between two variables, is one of the key starting points in gathering new knowledge. If it had never occurred to anyone that there might be a correlation between thalidomide and limb deformities, we might live in a very different world now. A few of the correlations that have been observed by midwives have been supported by the findings of research studies and their results acted upon in practice. Other theories, which have grown from someone noticing a possible correlation, have matured, in the absence of research interest or funding, into what might be called ‘common sense wisdom’. For example, many midwives believe that there are positive correlations between the length of the ‘purple line’ on a woman’s bottom and the dilation of her cervix, and between the number of strangers around a Western woman giving birth and the length of her labour. When I first wrote this article, neither of these possibilities has yet been well researched, although both were used by midwives in practice. Now, I am delighted to say that we have evidence of the purple line which we can use to help women.

Some possible correlations might, like the theory of the stork, amount to no more than interesting examples of ‘coincidental association’ when put under further scrutiny. They are, however, crucial to the generation of knowledge, and the initial key to discovering them lies in something that many midwives are very good at – simply watching what happens.

It is my belief that, without stories, science on its own wouldn’t be very interesting at all.  It is also my belief that it is a good idea to remain just as open about scientific findings as we should about our observations and, as I have said many times before, to hold a space for different ways of knowing. After all, while Hofer et al’s study might not lead to scientific endorsement, there are still big gaps in our knowledge about human reproduction and we cannot completely rule out the possibility that the humble stork might have some involvement…