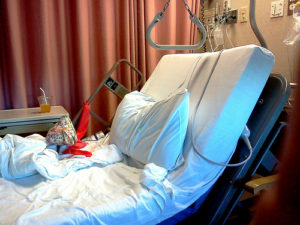 I first published a version of this post on bedlessness and ideas for promoting active birth back in 2013. I had received quite a few positive comments on a post about being womanside and was also spurred on by conversations in my workshops and courses about how midwives and birth folk can help more women feel that they can be free to do things other then get on the bed the second they enter a delivery room. I started a list of all the things I have used or heard of from midwives and doulas which relate to this, and I’m reposting it as I have been updating it – feel free to add your own suggestions in the comments!

This is a bit of a tricky area though. It’s not that we want to stop women from getting on the bed if they really want to.  Some women really would prefer it, or want to be active during their labour but are exhausted. And many have a cultural expectation that birth happens on beds, so we need to be careful to seek balance. Given that many modern delivery rooms aren’t really that conducive to promoting active labour and normal birth, it is important to consider how we can break the cycle of expectation that can lead to slower labours than would occur if women were nesting on the floor, sitting on birth balls, roaming around, adopting a range of positions and/or all of those other good things that help babies out.  But we don’t want our good intentions to come across in a way that makes it sound as if we think we know better than women what they want or need.  So, as ever, I’m offering these ideas as food for thought and debate rather than as universal recommendations…

I know lots of people who feel that beds are far too prominent in many delivery rooms, and they are concerned that women entering the room think that they are supposed to get on the bed straight away.  So, when they’re getting the room ready for the woman, they make the bed a bit less accessible.

1. If they can get away with it, some people do a bit of furniture moving and push the bed against the wall when they’re preparing for the arrival of a woman and her family; it makes it less prominent than if it is there in the middle of the room.

2. Others pump the bed up so it is higher than normal, so that it would have to be pumped down again before anyone could get on it.  This makes the act of getting on the bed a conscious one, rather than the default action.  (These days, you need a working knowledge of advanced mechanics to figure out the remote control for some of these beds anyway, and the chances are that, by the time someone has worked out how to get the bloomin’ thing back down again, the baby will have been born 😀 ;)) 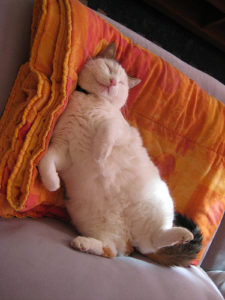 Put something on it

3. Midwives in one research study described spreading the woman’s notes out on the bed and using it as a writing surface, which again meant that the bed was less accessible as a bed.  Yes, there are pros and cons to the midwife taking ownership of the bed in this way, and this might not be appropriate in some contexts, but like all of these it’s just an idea for the toolkit.

4. A midwife I worked with as a student used to offer to carry the woman’s hospital bag so that the woman’s partner could walk to the room with her.  She would then heave the hospital bag and their coats up onto the bed and encourage the couple to unpack anything they needed onto the bed, which also had the effect of turning it into a table!  Ownership issue sorted and, because it’s the family’s stuff, they don’t feel they have to ask permission to move it.

Give verbal permission to be bedfree

5. Overheard while a midwife was plonking the woman’s bag or her and her partner’s coats onto the bed:‘You can use this for its intended purpose anytime you want to, but your labour is likely to be faster and less painful if you hold off getting up there for as long as possible, so you might want to try to stay upright as long as you can.  Let me know if you’d like to get into the pool for a bit of relief or just snuggle up on the beanbag if you need a rest.’

6. As above, many doulas and midwives suggest trying the pool before getting up onto the bed. 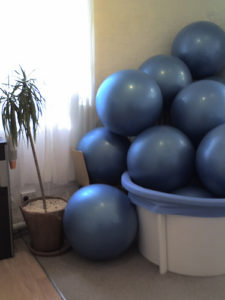 7. In one hospital that I spoke at, the labour ward didn’t have a birth ball in every room as standard, so midwives more experienced in facilitating active birth suggested to their colleagues that they grab one from the cupboard before the woman enters the room rather than offering to go and get it.  My experience and understanding of psychology would support the idea that, if you do this beforehand, woman are much more likely to use such alternatives than if you offer them as an option later on.  There’s a good analogy involving parties here: if you put peanuts out before anyone arrives, people will just start eating them.  If you haven’t already put them out and you say to a guest, ‘would you like me to put some peanuts out?’, then (at least in the UK and unless they are really hungry) they might decline, because they don’t want to create extra work…

8. My own preference when working in a hospital setting is to offer a cosy nest in addition to whatever other furniture is there.  I like to make nests in a quiet corner of the room out of chairs, floor mats, inco (chux, blue) pads, beanbags and spare hospital bedding.  I make them as inviting as possible (which, yes, is hard with hospital bedding, but it’s a good chance to exercise ones’ creativity muscles!), and I point them out to women upon arrival and say, ‘if you would prefer a nest at any point, that’s all yours and you can move it around however you like, and you can add anything else that you like to it…’

Right then, (back) over to you if you can think of any more!

And if you’re a midwife or other birth worker who enjoys learning new things and sharing tips, ideas and wisdom with like-minded others, come and join Sara and colleagues from all over the world in one of our online courses!

4 comments for “Eight ways of promoting active birth through bedlessness…”