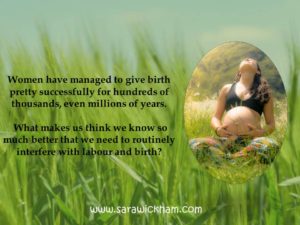 A few weeks ago, a woman said to a midwife friend of mine, “I really don’t want to have induction if I go overdue. Everyone I know who has one has a horrible lonely experience in the hospital for days on end and then ends up with a caesarean section anyway. Why don’t they just be honest and give us the option of a section in the first place?”

Then a question was sent to my blog. “If they’re so worried about my baby being big, why are they suggesting induction? It can take days. Lots of time for the baby to grow more, if that’s really a problem. And I don’t understand. If size is such a problem and so many inductions fail, why they don’t just section me and have done with it? Can I request that?”

A week later, someone in my online course wrote something similar: “A woman in an antenatal class that I’m facilitating said to me the other day, ‘there’s no way I want to have an induction, can I just put in my birth plan that I would rather just have a caesarean?'”

These aren’t isolated questions. I’ve asked around a bit, and others are hearing and reading this too. It raises an interesting question: when we consider whether and how much induction is raising the caesarean section rate, are we counting the women who are wanting or requesting caesareans because of fear of induction of labour?

Who is measuring a possible rise in caesarean section rates due to fear of induction and its costs and consequences, which include unexpected sensations, potentially long stays in hospital and possible separation from loved ones? Especially when, whatever certain researchers say, so many women who go down that route DO end up with a caesarean section.

Why can’t we be more honest?

Why can’t we be clear that the alleged benefits of induction of labour are often marginal at best, and often very debatable?

And it wouldn’t hurt if we could manage a bit more positivity as well. Women have managed to give birth pretty successfully for hundreds of thousands, even millions of years. What makes us think we know so much better that we need to routinely interfere with labour and birth?