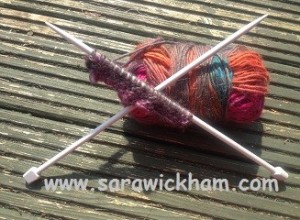 I am happy to call myself a knitting midwife. And it’s at this time of year that I often reflect on this. The weather in Wiltshire has taken a turn for the cooler of late, and I have responded in the time-honoured fashion. By digging out my knitting needles and wool. And to save anyone the trouble of asking, I’m currently making friendly bacteria and socks. More of which on Instagram!

I learned to knit as a child, and I have an early memory of a midwife helping me to knit. But it was Michel Odent who really brought my attention to the links between knitting and midwifery. He remarked in the midwifery literature upon what was at the time an unremarkable sight: a midwife sitting in the corner of a room, quietly knitting while a woman laboured to birth her baby. Several years’ worth of articles and discussions later, he decided that we should have a Silent Knitting Workshop at the Mid-Pacific Conference on Birth and Primal Health in Hawaii. I recall, when he asked me if I would speak at the conference, that the Silent Knitting Workshop was on the agenda before anything or anyone else.

It totally needed the capital letters. He was very excited about it, and mentioned it every time we spoke.

Quite how I then managed to fly into Hawaii without any knitting to work on is beyond me. It’s likely that a hectic schedule and circuitous travel route through a number of other countries and states (during which I almost achieved a long-held ambition of appearing on Border Control, but that’s another story) may have played a part. I am never without at least one craft project, however, and so it was that I trotted off to the Silent Knitting Workshop bearing a half-made cross stitch elephant. And a friend’s young daughter, who had decided she needed to come with me. She was ready for a break from hearing her mum give the same presentation for the seventeenth time. I said that of course I would be delighted to have her company, although I wanted to be sure that she understood that this was a silent workshop. With a capital S. And that we were going to knit – or cross stitch – without talking. As it happened, this was no problem at all because she needed to learn to cross stitch a lion.

And so it was that I came to be part of an inter-generational craft trio that gathered within the Silent Knitting Workshop because, as we entered the room, Michel spotted me. He beckoned us over and said, ‘Good, you’re here … now you can help me remember how to knit!’

I had long known that Michel had knitted as a child. He had told me many times, when we spoke at the same events and I would quietly knit while others gave their presentations. He had helped to knit socks for French soldiers in the war. So I knew it wouldn’t be hard to help him remember, although I suspected that my grandmother’s chant of ‘in, round, through and off’ which I learned to recite while making each stitch was probably somewhat different from any French mantra that Michel would have been taught.

It was fascinating to try and help someone remember a hand skill without actually being able to talk to them in any language (because the workshop was Silent), but soon enough he was knitting steadily away. My next task was even harder: trying to teach another hand skill (that of cross stitching a lion) to someone who has no prior experience. Without using any words. And while periodically needing to return to help Michel locate the occasional stitch that had been mislaid.

We all got on OK, and at the end of the workshop Michel proudly handed me a piece of multicoloured knitting (still on the needles) as a gift. I still have it, and it’s in the picture in this blog post. And on my other side at least half a lion had been beautifully cross stitched. I had probably only spent about a quarter of the time working on my own project, but that was unimportant compared to the satisfaction of having shared my skills and helped facilitate the creation of other masterpieces. And I did get some time to sew and reflect myself as well.

The association that Michel makes between the repetitive nature of knitting (as practiced by the midwife) and the provision of reassurance at birth is, in my mind, very worthy of reflection. I can also see how this might help the flow of oxytocin and have written about such associations myself. Yet I have come to think that this important observation is actually only one tiny element of a far bigger picture. The value of craft comes in many other dimensions and forms as well, and more than one of these might be relevant in relation to birth and midwifery. Not all knitting projects are equally repetitive, and some require far more concentration than might be appropriate for a midwife who needs to also be aware of the birthing woman. Both knitting and many other kinds of craft bring a variety of valuable states of mind, body and spirit and we have only really begun to start reflecting on such topics, and on the relationships between women, craft and birth. Conversations on this topic – and I use this word in its broadest possible sense, because I understand the value of silence as well – need to continue. And I for one am delighted to have yet another justification for spending more time undertaking and chatting about craft activities!

You can see all of my knitting and crafting-related resources here:

Or come over and check out our Etsy shop, where I sell a few handmade things now and again to help fund our Birth Information Project.