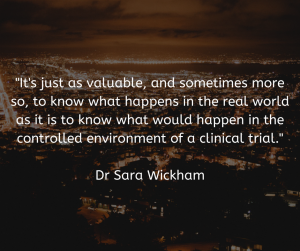 A fascinating new study has led to a better understanding of how upright breech birth is happening around the world.

If you’ve ever heard me speak about birth-related research, you’ve probably heard me saying how important it is to remember that randomised controlled trials are only one form of evidence. I frequently point out that such trials are limited, that they only gather certain types of data and that we need a multitude of different kinds of research and knowledge in midwifery practice. One of the types of knowledge that can be really useful is ‘real world’ knowledge, which can come in different forms, and the study I want to share with you in this blog post is a great example of that.

The title will give you a good idea of what the study was about: “Practical insight into upright breech birth from birth videos: A structured analysis.” Reitter et al (2020) set out “to identify common features of upright vaginal breech births with good outcomes to refine a physiological approach to teaching breech birth”. What a great idea: let’s look at how upright breech births are actually being facilitated and see what we can learn from this. The researchers analysed “42 videos of successful upright breech births (eg, kneeling, hand/knees), facilitated by obstetricians (n = 34) and midwives (n = 8) in nine different countries”.

There are a number of interesting findings, some of which are new, and I would encourage anyone interested in breech birth to read this freely available paper carefully and in full. A third of the births, for instance, were completely spontaneous. That is, the babies were not deemed to need any touching or external facilitation from a caregiver. Another finding that stood out for me was the authors’ suggestion that:

“We suggest that for upright breech births, a delay of 90 seconds or more occurring at any point during emergence indicates a completely spontaneous birth is unlikely and consideration should be given to assisting the birth. Encouraging maternal movement and effort before performing hands‐on interventions will help to spontaneously resolve minor delays, or to confirm the need for manual assistance.” (Reitter et al 2020).

One thing that I would like to have known – although I acknowledge that this might not have been possible, through no fault of the researchers – is where the births took place. The videos that were analysed were already in existence, so the researchers wouldn’t necessarily have been able to access such details, or to gather information about the birth attendants or their approach. We know that ten per cent of the women in the videos that were analysed had an epidural, but not much more about their experiences. This is a reminder that context is really important. There are some key differences in the definitions of terms like ‘physiological’ in this area of research and practice, which makes such questions inevitable. And when a fascinating study like this comes along and changes some of what we previously thought, it’s only natural to want to know as much as possible about the setting and the approach of those who were making the decisions about what these babies needed.

So in summary, this research set out to consider the characteristics of “normal” breech birth physiology; which “may enable birth attendants to avoid unnecessary and potentially traumatic manipulation. Clearly recognizing when progress deviates from “normal” may also encourage attendants to apply timely assistance when required.” As a result of this study, a new algorithm has been developed for physiological breech birth. This just goes to show that it’s just as valuable, and sometimes more so, to know what happens in the real world as it is to know what would happen in the controlled environment of a clinical trial.

This paper is well worth reading in full and you can access it here.

This was my ‘study of the month’ in my Birth Information Update, a monthly newsletter in which I share up-to-date birth-related research and thinking. If you’d like to hear about new research, make sure you’re subscribed to our free newsletter list, which means you’ll get Sara’s monthly Birth Information Update and details of our current projects.