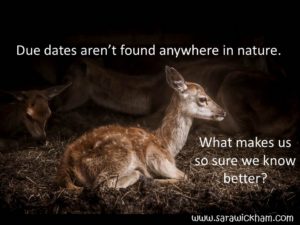 I’ve always been proud of the fact that I was one of the five per cent of babies who was born on their due date, although I’m not really sure why. I am so proud of this fact that I felt it necessary to share it on the very first page of my PhD thesis, which detailed my exploration of midwives’ knowledge around post-term pregnancy. Not that anyone else saw this as a relevant topic for discussion in my viva, but at least I had noted for posterity that I arrived on time and at home. I also, in case anyone else would like to be amazed by my considerate nature as a neonate, chose to arrive on a Saturday afternoon, ensuring that no-one missed a night’s sleep and that my midwife got home for supper.

My younger sister, however, wasn’t nearly as punctual. Though I feel for the sake of good sibling relations that I should now cease implying that such matters are within the rational control of those navigating the birth canal. Ten days overdue, and our mum was taken into hospital because it had recently been decided that it may be better to induce women’s labour at such a juncture than to await the spontaneous onset of labour.

I’ll save the intimate details for less public settings and suffice to say that, as far as Mum was concerned, the difference between our two births was like chalk and cheese.

Some of the features of her induction experience – which included sedatives, mis-information, abandonment and being at the mercy of the schedule of the local labour ward – are still issues today. Some of the interventions that she suffered (and yes, that is the word she would use) have been replaced by others. Not necessarily for the better.

The crazy thing is that, once I started to read the research around induction for post-term for myself, I realised that there was very little evidence to support what had happened to her. Either then or now. By that time I had also become a midwife myself. And I had witnessed other women having similarly horrid experiences. It wasn’t OK, and I set out to do what I could about it.

That’s where my passion comes from, and it won’t abate. Because more people need to learn that there’s more than one way of looking at this issue. The evidence for routine induction is, frankly, a house of cards, and so much of what women are being told is simply baseless. It was baseless when my mum was induced, and it remains baseless now.

I have now taught this topic and debated the evidence and the issues with midwives, doctors, doulas, nurses, birth educators and others in many countries. I have written two bestselling books about induction. Both are designed to help people get informed so they can make the decisins that are right for them. And I frequently talk about this topic in my online courses and at live events.