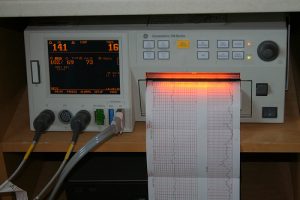 Two senior doctors have written to the British Medical Journal to commend them for publishing a recent debate which highlights the way “in which the doctors supporting monitoring seem to cherry pick evidence” (Bewley and Braillon 2018). During this debate, Peter Brocklehurst, the “principal investigator of many great obstetric trials (including INFANT, a randomised controlled trial of 47 062 women undergoing continuous electronic fetal heart rate monitoring)” (Bewley and Braillon 2018) explained that,

“As a screening test, electronic fetal monitoring performs poorly. It has a poor positive predictive value, even with computerised interpretation of the fetal heart rate. This means that most of the fetuses identified as being at risk of hypoxia are not.” (Brocklehurst 2017).

In their letter, Bewley and Braillon (2018) point out that “Cochrane, the International Federation of Gynecology and Obstetrics, and the National Institute for Health and Care Excellence have all said that no evidence shows that human or computerised interpretation of cardiotocographs reduces the rates of intrapartum stillbirth and cerebral palsy but does cause maternal harm. INFANT showed that adding intelligent decision support to costly and demanding cardiotocography did not improve clinical outcomes for mothers or babies.”

They offer suggestions of other approaches to screening for and dealing with fetal hypoxia: mobile resuscitation devices which enable resuscitation to be carried out without cutting the cord, and carbon monoxide breath ananlysers. While the latter may raise ethical and wider issues which need careful consideration (as has been raised by some of the people involved in human rights and childbirth groups), it is clear that we need to reconsider this technology, which has failed to live up to our hopes.

Such reconsideration will not only involve challenging beliefs. Bewley and Braillon (2018) conclude that, “Our longstanding reliance on cardiotocography shows the effect of a rigid mindset but might be related to vested interests from equipment manufacturers, plaintiff lawyers, and experts with lucrative medicolegal practices.”