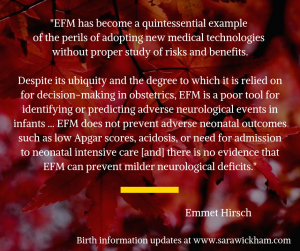 “EFM has become a quintessential example of the perils of adopting new medical technologies without proper study of risks and benefits. Despite its ubiquity and the degree to which it is relied on for decision-making in obstetrics, EFM is a poor tool for identifying or predicting adverse neurological events in infants. Randomized trials comparing EFM with intermittent auscultation (all of which were completed by the early 1990s and not repeated because EFM has since become widely adopted) have demonstrated that EFM does not prevent adverse neonatal outcomes such as low Apgar scores, acidosis, or need for admission to the neonatal intensive care unit. It is not a surprise, therefore, that the incidence of cerebral palsy has not changed in decades among infants born at term in the developed world (1.4-1.8 per 1000 live births). In addition, there is no evidence that EFM can prevent milder neurological deficits, such as developmental delay or cognitive impairment.”

Another paper highlighting the ineffectiveness of electronic fetal monitoring has been published, this time in the Journal of the American Medical Association. Clinical Professor of Obstetrics and Gynecology Emmet Hirsch (2019) gives an overview of the state of practice and the lack of evidence for EFM, despite tens of trials, concluding that, “The result of EFM becoming standard practice is that physicians and hospitals, perhaps indirectly, have contributed to harming families.”

You can read the article here.

← Vaginal examination in pregnancy
Love, kisses and other ways of knowing… →