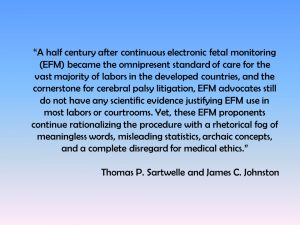 “Four centuries ago, the Catholic Church declared heliocentrism to be heretical, banned all heliocentric books, and ordered Galileo to refrain from holding, teaching, or defending heliocentric ideas. A similar effort is taking place today. It seeks to suppress debate over birth caregivers’ half-century misguided use of electronic fetal monitoring (EFM) and cesarean sections (C-sections) to allegedly prevent cerebral palsy (CP). The theory — EFM predicts CP and just-in-time C-sections and prevents CP — has caused more harm than good to mothers and babies and has resulted in decades long, worldwide EFM-CP litigation that has reached a crisis of near epidemic proportions, costing tens of millions annually.”

This article, the latest by Tom Sartwelle and Jim Johnston and freely available online here, tells the story behind some of the recent EFM debates in the medical literature and discusses the bias towards electronic fetal monitoring and away from critical debate of the issues and the evidence (and lack thereof) on this topic. It highlights the vested interest of those wishing to continue using and defending EFM and raises important quesions about the need to critically question the evidence and thinking that underpins maternity care.