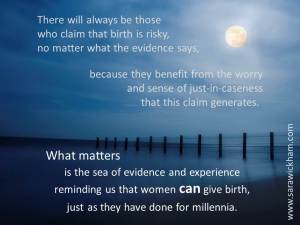 Research on Australian Birth Centres shows that these fab birthing places are effective there as well!

As the authors explain, mainstream Australian maternity services are very medicalised and these birth centres are the only ones of their kind:

New South Wales’ maternity policy strongly supports tertiary-level maternity care for all women.6–11 Planning to give birth at a facility without on-site specialist medical support is largely perceived as hazardous and unsafe for women and their unborn babies.6 ,12 Consequently, there were only two freestanding midwifery units in New South Wales (and in Australia) in 2005, recording a combined total of approximately 300 births,13 ,14 compared with seven tertiary-level maternity units with 25 637 births.15 ,16 It is unknown whether the actual gains match the expected gains of concentrating all low-risk births in large tertiary hospitals.5 (Monk et al 2014).

Studies such as this are often criticised by those who profit from the idea that birth is risky and needs to be ‘managed’ in high-tech environments, but a closer look at the content shows that these authors took measures to ensure that their research was of good quality.  They analysed the outcomes according to the place where women intended to give birth, and had minimal loss to follow-up.

One specific finding that I would like to highlight relates to placental birth.  This will not be a surprise to those familiar with studies and audits of placental birth in out-of-hospital settings and with birth attendants whose approch respects and supports rather than detracts from the physiology of labour and birth:

An element that will almost certainly be further debated as more Australian birth centres are set up is the transfer rate, which in this study appears to be higher than in the Birthplace study and recent Danish research, at 51%.  But the authors point out that this figure includes a high rate of antenatal transfers, at 34%, whereas the intrapartum transfer rate is similar to those in the aforementioned studies.  The authors also note that “women and midwives are encouraged to err on the side of caution and transfer antenatally whenever there is a possibility that medical intervention may be required during the birth process” (Monk et al 2014).

I don’t know whether my Australian colleagues will be able to relate to this or not, but the reality in most of the birth centres which I have worked in or been associated with is that the midwives are well aware that they are under close and constant scrutiny and that there are those who will see any adverse outcome as a reason to call for the closure of such a unit.  Such scrutiny tends to have an effect on decision-making…

But today isn’t a day for dwelling on negativity, because this is a landmark study which needs to be celebrated.  Thanks to Monk et al for their research and for producing such a straightforward and readable paper which adds to our body of knowledge in this area.  There will always be those who claim that birth is risky, no matter what the evidence says, because they benefit from the worry and sense of just-in-caseness that this claim generates.  What matters is the sea of evidence and experience reminding us that women can give birth, just as they have done for millennia..

Objective: To compare maternal and neonatal birth outcomes and morbidities associated with the intention to give birth in two freestanding midwifery units and two tertiary-level maternity units in New South Wales, Australia.

Conclusions: The results of this study support the provision of care in freestanding midwifery units as an alternative to tertiary-level maternity units for women with low risk pregnancies at the time of booking.

← The elephant circle
What do you think about Chlorhexidine? →