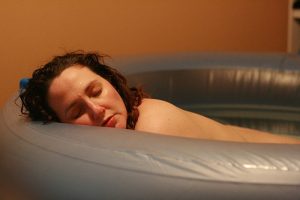 In order to do this, the authors analysed 25 different policies and guidelines relating to water immersion during labour and birth and, while I wasn’t wholly suprised at what they found, I was impressed by the way in which they have explained how the dominant technocratic approach to birth uses the ideas of risk and safety to limit the options that are available to women using the example of water immersion. Furthermore, their paper offers a great explanation of how midwives are often stuck between the proverbial rock and hard place when it comes to supporting women in this area.

“[W]hilst there were references to women being able to exercise discretion and to request water immersion this was often superficial and overshadowed in part by foci of risk and safety. Autonomous midwifery could only be exercised within the confines of what was risk free and safe which left somewhat of a contradiction given that statements and references to the practice of water immersion. Whilst the documents suggested that [water immersion] was an effective strategy for promoting normality and reducing pain the practice was clearly clouded by a level of uncertainty particularly in regards to maternal and neonatal safety…” (Cooper et al 2017).

The authors noted that the policies and guidelines presented pregnancy and birth as risky events which become even more risky once a woman enters the water, which in turn led to “discussion of the way in which women needed to be continually monitored, observed and assessed for risk” (Cooper et al 2017).

(It really does make one wonder how on earth the human race survived before the era of risk management and mass obstetric intervention 😉 ).

Some waterbirth guidelines, as readers will probably know, are really quite unhelpful, and some of the alleged risks that they cite are unfounded. For instance, “Three documents also included the recommendation that third stage was conducted out of water due to the ‘theoretical risk of water embolism,’ without the support of contemporary evidence.” (Cooper et al 2017). If you don’t know why that is unfounded, this blog post will help.

While some people may feel that papers like this one make depressing reading (and of course they do, in that they highlight the way in which often baseless ideas still dominate maternity care, which can lead to very real problems for women, families, midwives and birth folk). But I also always feel heartened when I read papers such as this one, because they highlight the problem and help us understand that the dominant narrative is only one way of thinking. The technocratic approach to birth is only one viewpoint. It’s not infallible, it won’t last forever, we don’t have to subscribe to it and, no matter how many times people use the words ‘evidence’ or evidence-based’, it doesn’t necessarily make what they are saying or writing any more true or useful.

← The language of birth: crossing the Ts and promoting positivity
Resources for questioning vaginal examination →