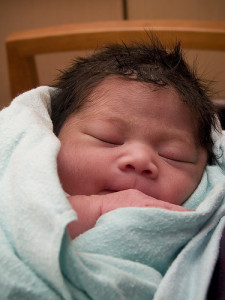 What are the harms of GBS screening? And why is it hard to measure them?

“In my view there are two main issues that hamper the assessment of harms and benefits of antenatal GBS screening.

The first is the artefact introduced by using GBS culture-positivity when assessing the outcome of the use of IAP [intrapartum antibiotic prophylaxis]. The presence of antibiotic in the baby’s circulation will inhibit the growth of the organism, despite the clinical picture of sepsis. This artefact means we remain uncertain how effective IAP really is.

The second is the huge number of women who require IAP for the small number of symptomatic neonatal infections that are likely to be prevented, with the resulting concerns about the impact that antibiotics given at the time of labour may have on the longer-term outcomes for a large number of babies.

This uncertainly about impact was highlighted by the follow-up of the ORACLE trial (Kenyon et al. Lancet 2008;376:1319–27), but extends well  beyond that, with concerns that selection pressure applied to the developing microbiota may have profound long-term health consequences (Bedford Russell & Murch BJOG 2006;113:758–65; Quigley Gastroenterol Hepatol 2013;9:560–69). 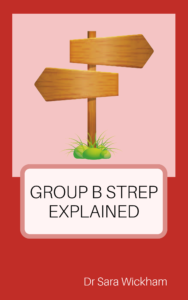 The updated second edition of a popular book which helps parents, professionals and others to understand the issues and the evidence relating to the screening and prophylactic measures offered in the hope of preventing early-onset group B strep (EOGBS) disease.

Added to which, there is growing international pressure to limit the use of antibiotics in the face of increasing resistance and a lack of new antibiotic development. Being able to identify women and babies who would most benefit from antibiotics would be an important step in balancing the benefits versus harms of such a programme.”

← The paradox of palatability
Does induction really reduce the likelihood of caesarean section? →