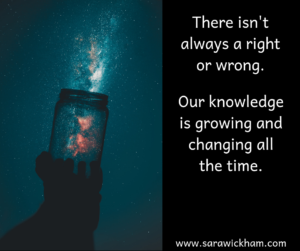 In 2018, there was one topic on which we received more comments, emails and enquiries than everything else put together: induction of labour. Yes, that’s probably partly because I wrote about it myself. But I’ve written about plenty of other topics too and induction of labour is still consistently the most discussed.

When we briefly analysed the nature and content of the comments that we received, many expressed concern about rising induction rates. We heard from many women who were told they ‘needed’ induction or that their baby was ‘at risk’ but without also being given good evidence to support this claim.

One issue that we heard about more than ever before was from women who had been told that their baby was at risk because their placenta was ‘insufficient’ or ‘aging’. I have written about this a bit, noting that, “The concern here is that the concept of placental insufficiency could be described as rather ‘slippery’, and there is no evidence to suggest that there is a correlation between placental insufficiency and length of pregnancy. As an obstetrician friend of mine likes to say, if a woman’s placenta isn’t working well at 23 weeks, then it is unlikely to be working well by 39 weeks. But if it is working well at 40 or 41 weeks then there’s no good reason to think its function is suddenly going to decline over the next few days.” (Wickham 2018)

But we really needed more reasoned discussion of the theory of placental aging, so I was very happy to see the publication of this article – The Myth of the Aging Placenta – by Dr Sophie Messager, a doula and birth educator who also has a PhD in physiology of reproduction and twenty years of research experience. The article is long and detailed so, as she recommends herself, you may want to make a cup of tea before settling down with it!

There are a few things that I particularly appreciate about Dr Messager’s article. First, she offers an important discussion about the way in which theories such as this one are sometimes presented as accepted fact by certain groups when there is still a lot of debate, uncertainty and disagreement. Dr Messager’s background in science makes her well qualified to make the point that even (or perhaps especially) at the highest levels of scientific advance and debate, experts often disagree with each other.

I can attest to this from my own experience too; I count myself lucky to have many other academics and scientists in my social circle and I have sat through and participated in heated (although generally also professional, respectful, friendly and sometimes humorous) debates on topics from archaeology to transport geography (a topic often discussed at our house, so be warned if you come for dinner). I spotted early on in my life that, in general, the cleverer the person, the more they are apt to listen to others and the less likely they are to be dogmatic about what is ‘right’ or ‘wrong’.

That’s because of another really important point: there isn’t always a right or wrong, and our knowledge is growing and changing all the time. Many of the things I learned as a student midwife some twenty-five years ago have now changed. The illustrations of breast anatomy that were available when I learned about the anatomy of breastfeeding, for instance, are no longer considered accurate. But is the revised picture that we have today going to still be considered ‘true’ and/or relevant in another twenty-five years’ time? Well, who knows! Knowledge isn’t fixed or certain and claims that it is should be treated with caution; they often say a lot about the mindset of the person making the claim.

But the part of Dr Messager’s blog post that I found the most enlightening was when she looked, with the benefit of her own scientific background in the physiology of reproduction, at each of the changes that are being cited as evidence of placental aging and showed how they can also be interpreted as simply being signs of the changes that are associated with growth and development, which is exactly what our placentas and babies are supposed to be doing. This is an important element of the debate that needs more discussion. As I noted in Inducing Labour: making informed decisions, “our modern culture is not very tolerant of the concept of aging generally, especially in women, so it is not that surprising that we so easily accept the idea that the aging placenta is unwanted and problematic.” (Wickham 2018)

I went on to look at the issue of hour out culture sees pregnancy, birth and induction in another book, In Your own Time: how western medicine controls the start of labour and why this needs to stop.

Throughout my career, I have seen many examples of theories that have been proposed, often by someone keen to make their name (and perhaps also give it to a part of a woman’s anatomy, a procedure or a saleable tool), and which have later been shown to be false and potentially detrimental. And yes, I’ve also seen theories become more trusted and valuable with time as well. Perhaps the key lies in being able to differentiate between knowledge, evidence and wisdom.

To quote Dr Messager once more, “The concept of the aging placenta is still just that, a theory. Unfortunately the majority of the publications cited in this post fail to acknowledge this, and take this theory as proven.” I recommend reading the blog post in full if you’d like to delve into this area more deeply.

← How do women feel about induction of labour for post-term pregnancy?
The value of leaving the umbilical cord intact →