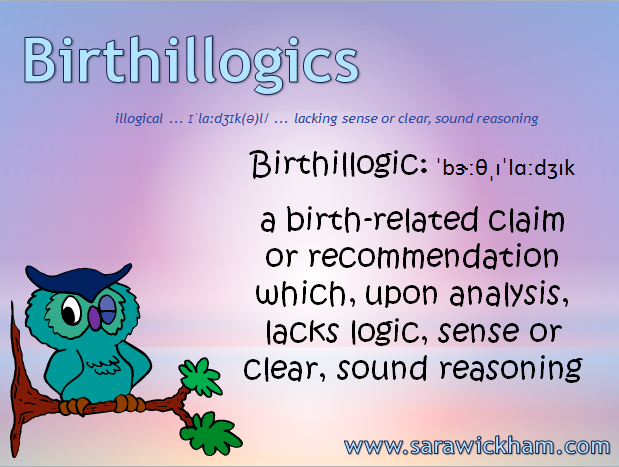 Is the recommendation of induction for advanced maternal age truly based on sound evidence? Or is it illogical when you break down and really think about the issues?

For anyone who hasn’t heard the term ‘birthillogic’ before, I created this word to refer to a birth-related claim or recommendation which, when analysed, lacks logic, sense or clear, sound reasoning. I have discovered quite a few of these over the years, and have read about many more through the work of other people, so they are numbered on my website for anyone who would like to find them more easily.

I actually have two examples of ‘birthillogics’ to offer on this topic. I have long been interested in the literature and research on the routine offer of induction of labour for advanced maternal age. It’s something I wrote about in Inducing labour: making informed decisions. This literature is, if I may be so rude, a morass of unhelpfulness. Not, I hasten to add, that I am seeking to apportion blame for this, and it isn’t the real reason for my post, but it might help to put the birthillogics into context if I briefly explain what I see as the problem.

If you are a woman who is pregnant at an older-than-average age, then good for you. We don’t celebrate this nearly enough, so let’s just briefly stop and say yay!). But you may well face a difficult decision somewhere around or just after your pregnancy reaches ‘term’.

That is: you may be offered induction of labour and will need to think about whether or not to have your labour medically induced.

Induction of labour involves a series of procedures that are not the most pleasant and that may also bring unwanted side effects. You can also decide to await spontaneous labour. This is easier in that it is the default position, but, if we are honest, waiting is challenging for some. Both options come with pros and cons. One of the most fundamental questions you would want to know the answer to is whether there is really an increased risk of losing a baby if you are older and wait and, if so, whether this outweighs the risks of induction?

You will likely (and rightly) be told that there are studies out there whose findings suggest that waiting carries an increased chance of stillbirth. But unfortunately that is not the whole story. There are good reasons to be concerned about the extent to which the findings of the studies are accurate and relevant to women making this decision today. Many of the studies do not take into account the fact that women who are older are more likely to have existing problems. These include high blood pressure. Older women are also more likely to have conceived through the use of assisted reproductive technologies (ARTs). Both the use of ARTs and the existence of other problems (sometimes called co-morbidity) can lead to problems in themselves. So a good research study needs to take that into account. In simple terms, researchers should try to separate out the risk caused by these known problems from any risk caused simply by age. Most of the studies don’t do that, though. And this means that their findings aren’t that helpful to the majority of women making this decision.

The scientific opinion paper that the RCOG (2013) published on this topic acknowledged this, and cited two papers that controlled for these factors.  Fretts et al (1995) used data gathered in Canada from 1961 to 1993, while Pasupathy et al (2011) analysed data gathered from the experiences of Scottish women who gave birth between 1985 and 2004. Unfortunately, as Rosemary Mander (2013) recently pointed out, both of these studies included women who gave birth so long ago that it is questionable whether their experiences can be compared to those of women giving birth today.

It was also Rosemary who, while she was analysing this RCOG paper (2013), spotted the first birthillogic that I would like to share on this topic:

‘There are also a number of unexplained slightly paradoxical points which reduce the reader’s confidence in the paper, such as the statement ‘that ageing impairs myometrial [uterus muscle] function’ (2013). This leads the reader to question why, if this is so, are such ‘older mothers’ being recommended to labour at all?’ (Mander 2013: 48)

Quite. But, to be clear, and before anyone wonders whether ‘the better answer’ is cesarean section, I think that before we focus on the potential implications of the original statement. The claim that aging impairs myometrial muscle to a problematic degree. We actually need to ask whether the original statement is even true. I would think that it would be prudent to conduct a rather thorough investigation of any such claim, especially given its potential impact, but (to my knowledge) this research has not been done. Assumptions have been made. And the problem with assumptions is that they can affect the beliefs of care providers and others, and that can sometimes mean that beliefs turn into self-fulfilling prophecies.

Our second birthillogic on this topic runs along similar lines. Pasupathy et al (2011) concluded that the increase that they found in stillbirths in women over 40 was the result of hypoxia. But, if this is the case, how is induction of labour an appropriate response? Induction of labour generally involves the use of synthetic oxytocin, and one of the many downsides of using synthetic oxytocin is that it can cause hypoxia…

These two birthillogics are based on slightly different claims. We may or may not accept either or both of those claims. But even if we did accept them then induction of labour isn’t the most logical solution to either. Again, we need to do lots more work before we can be clear about whether there really are risks, and what those risks are.

And there’s one more important point. Even if there is an increased risk, we cannot know if induction of labour reduces that risk until sufficiently robust randomised controlled trials have been carried out. To date, I know of no such trial.

The current juxtaposition of the enormity of the choice that these women have to make alongside the lack of good data to which they can refer is appalling. In the meantime, rather than routinely offering justifications for induction which sometimes seem to be based more on fear than evidence, how about if we routinely offered a bit of clear thinking, a bit more honesty about what we can and can not tell from the research and, frankly, an enormous dollop of support and TLC for those women who have to make such decisions? And (with many thanks to Rosemary for highlighting this too) a few more ‘yay’s in celebration of their good news might not go amiss either…

If you’d like to read more about induction of labour, for older women and in other circumstances, you might enjoy my book, Inducing labour: making informed decisions.

Royal College of Obstetricians and Gynaecologists (2013).  Induction of labour at term in older mothers (Scientific Impact Paper No. 34).  London: RCOG.

← The importance of BO…
Midwives make a difference →