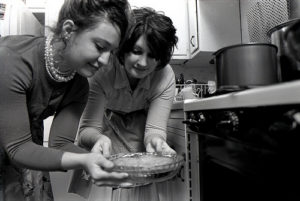 I [recently] wrote about some of the advantages and disadvantages of habits, customs and traditions and suggested that, as well as looking at the bigger issues of the routine interventions that need to be challenged, it may also be beneficial to consider the smaller, everyday areas that are discussed less often. In this article, I’m going to continue this exploration by considering what can be learned by investigating the historical basis of these behavioural patterns.

The Chicken and the Condiments

I once heard a story about a woman (let’s call her Bea) who always cut the legs off whole chickens before she put them in the oven for roasting.  One day, when a friend asked Bea why she did this, Bea replied that it was what her mother had always done, so she had assumed that it was the best way to roast a chicken.

The next time she saw her mother, Bea asked about it, and Bea’s mother said the same thing; it was what her own mother had done when she was growing up and she assumed it was for the best.  Bea’s grandmother was duly approached and laughingly told her daughter and grand-daughter that, when she was a young mother, her oven had been so small that this was the only way of getting a family-sized chicken to fit inside it.  Despite having a modern oven that was probably big enough to cook two chickens, Bea, like her mother before her, had unwittingly continued a fairly unique family tradition that had begun out of necessity.

I was reminded of this story when, after we moved house, my partner quizzed me about why I kept putting the salt and pepper back on the Welsh dresser when this wasn’t, in his view, the most logical location for them. The answer, as you might anticipate from having read the first story, was that the Welsh dresser had been the most convenient spot in the kitchen of our old house, and it hadn’t occurred to me to reconsider my habit of putting them there.

As I noted last month, custom, tradition and habit are marvellously labour-saving devices.  If we all spent time researching ways of arranging chickens in ovens or considering different locations for condiments after every meal, our lives would probably be a lot less interesting. Many families, groups and cultures (including midwives) develop customs which may well be borne out of things like common sense and necessity, but which may, on occasion, be continued past the time when the reason, need or rationale for their creation has passed. When we are asked why we are doing these things and realise that we can say only that we have always done it that way, however, the next logical step in our thinking is to think about how the custom came about.

On one antenatal ward, for instance, the women who are having their labour induced are admitted into in bay 6. When I visited this hospital to speak at a study day, I was taken on a tour and a couple of the midwives joked about how the Trust enforced an exercise regime on the midwives, because bay 6 was the furthest room from the midwives’ station and they were forever running back and forth on ‘induction days’ in order to check CTG printouts. No-one could explain why bay 6 was used for this when other identical and closer bays existed until we raised the question generally. A midwife who had worked at the hospital for many years remembered that, when the ward was first built, the midwives’ station had previously been at the other end of the ward … right next to bay 6.

Another hospital tradition I encountered (and which has subsequently been addressed) was the holding of a labour ward ‘handover’ session in front of a board where the names and details of women were recorded. The problem with this tradition was that, when the custom began, visiting hours were restricted, the layout of the ward was different and the board and handover were private. A complaint caused the staff to realise that this was no longer the case and that, if confidentiality was to be maintained, the tradition needed to change as a result of the reorganisation of other aspects of the environment.

As I said last month, these issues are rarely black and white, and, moreover, there are many examples of traditions which benefit everyone concerned. One example might be the use of sticky butterflies on women’s notes to let midwives know when a woman has lost a baby; even a midwife who is new to a particular unit has a good chance of knowing what one of these stickers means because they are used throughout the UK.

It is not, then, tradition (or custom or habit) per se which is the problem, but the inappropriate use, development or passing on of patterns which may no longer be beneficial is something that we should perhaps all be aware of.  As I’ve discussed in here, one of the most important questions that we can consider is how a particular tradition came about, but there are other questions that are just as important, and I’ll talk about those in the final article on this topic.