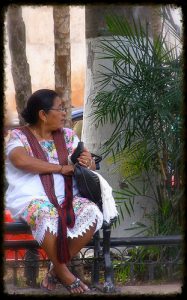 What’s the evidence for rebozos?

Last month, I shared the story of my own introduction to the rebozo: a Mexican shawl whose popularity has grown in midwifery conferences and workshops to the extent that it is now used and taught by a number of midwives and birth workers around the world. I noted that the increasing interest in its use, coupled with the obligation to provide evidential support for new innovations in mainstream midwifery practice, has led to my being asked on several occasions whether there is research evidence to support its use.

In my first article (Wickham 2017), I explained that there are no trials or systematic reviews of this area and suggested that this may reflect the fact that the rebozo is an everyday garment, which midwives have co-opted to use in myriad ways rather than a tool that was developed to solve a specific and measurable problem.

One way of translating traditional practices within a western medical framework is to consider, as Simkin and Ancheta (2000) discuss, whether we are using something for comfort, distraction or progress. This consideration enables us to tease out the indication and be specific about what we are trying to achieve when we are using such tools. Asking ourselves what the indication or rationale for trying something such as rebozo massage is, can also be a way of ensuring that we aren’t interfering unnecessarily with normally-progressing labour. It is all too easy to see a colourful scarf as being very different from an epidural, and yet both are used as interventions in a process which, if left alone, will usually not require intervention.

Another glimmer of light

Although my searches for evidence haven’t discovered any research trials, I was very heartened when I discovered a couple of recent papers on the topic of rebozo use in mainstream midwifery practice. One is a useful discussion of using rebozo in an NHS setting (Davis 2014) and the other originates in the US. I would recommend both to anyone seeking to introduce or continue the use of this tool – or a version of it, since in many hospitals the original woven woollen rebozo is seen as an infection control issue. The answer to this dilemma, as both Davis (2014) and the US paper’s authors, Cohen and Thomas (2015) explain, lies in using a bed sheet, which can be laundered in between uses. Cohen and Thomas (2015) note, however, that if a woman brings her own rebozo then that is used instead. I also want to mention de Keijzer and van Tuyl’s (2010) book on this topic, which is a valuable resource for anyone wanting to learn more.

Importantly, both papers cover the different techniques which they propose can be used within this situation and Cohen and Thomas (2015) share the protocol they created for their use of the rebozo in a hospital setting, along with consideration of health, safety and manual handling issues. Their work specifically focuses on the use of the rebozo to help in situations where women have babies in an occipito-posterior position. This serves to put the rebozo into a more well-defined set of categories; it is an intervention that is offered for a specific indication and with a specifically desired outcome in mind. That kind of clarity renders it more palatable and understandable to those who are used to working solely within the ideological framework of western medicine, though the trade-off is that it makes practice more rigid and doesn’t necessarily respect the more fluid thinking of some of those who promote its use.

WHO and traditional practices

One thing that we need to remember when we are trying to implement new practices is that there is a big and contentious debate around what constitutes effective evaluation. A useful element of Cohen and Thomas’ (2015) paper is the provision of an argument for the use of rebozos in mainstream practice without a body of scientific evidence. This draws upon the World Health Organization (WHO) statement on traditional practices: ‘The use of the rebozo to encourage optimal fetal positioning, although not yet studied in scientific trials, has a long tradition. The WHO clearly states that the lack of scientific studies on traditional practices “should not become obstacles to the(ir) application and development”’ (Cohen and Thomas: 2015: 446).

Whether this argument will be accepted on a wider level remains to be seen. I can say that, in my search for literature on this topic, I did not find concerns about the safety of using rebozos, although it would be remiss of me not to note that anyone using any tool with women and/or their babies needs to have adequately educated themselves and work in accordance with local and professional requirements.

While I love learning about traditional midwifery tools, techniques and practices, I am not of the opinion that everything that is traditional is automatically useful, good or without potential for harm. But I know of plenty of interventions within a western medical framework which are in routine use and which have far greater potential for harm than the simple tool of the rebozo could. Like many of my colleagues who first learned about rebozos in those early workshops and have had a decade or two to use them in practice (including Davis [2014], who also shares practical tips and experiences), I have seen a rebozo massage work wonders, and not just in relation to fetal positioning. I’ve also seen a rebozo massage make no difference at all, but nothing works every time. On balance, while I don’t have a randomised controlled trial to prove that rebozos work, I would bet that, if we could ever get an appropriately-designed study funded, they would be found to be effective.

In the meantime, I salute those who are taking the woman-centred path and incorporating rebozos – or sheets – into midwifery practice. I hope you’ll consider evaluating and writing about your own experiences so we can further add to our knowledge about these traditional tools.

You can see more of my posts and articles on my ‘rebozo resources’ page here: