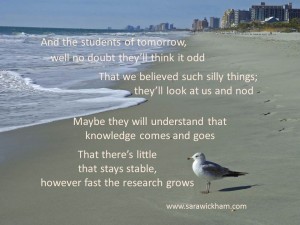 I believe that back in history the uterus was thought
To wander round the body, and when in the brain it caught
Hysteria would ensue, so any woman who dared to think
Was pathologised in an instant, abnormal in a wink

It’s since become more stable and we now think it stays put
It doesn’t travel to the ears, or meander to the foot
But other bits of A and P have changed as time’s gone by
The clitoris grew bulbs and extended in its lie

Retroplacental clots are now a distant ancient haze
And sinuses lactiferous a relic of bygone days
The baby doesn’t settle as its mother’s labour starts
It spins and moves all over; it wheels and turns and darts

Do they think, “Oh here’s the ultrasound, a study’s underway
Time for a bit of fun, I think I’ll spin around and play
And I’ll talk to my placenta and suggest a different way
To detach itself so we can have some fun and games today”? 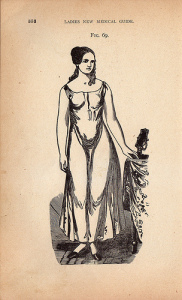 Now research may well be interesting, gazing can be fun
But it carries implications, and it’s important that it’s done
With care and understanding, with honesty and tact
And full appreciation that it’s not eternal fact

And the students of tomorrow, well no doubt they’ll think it odd
That we believed such silly things; they’ll look at us and nod
Maybe they will understand that knowledge comes and goes
That there’s little that stays stable, however fast the research grows

In the meantime, we must stay alert for new facts that appear
Adapt our ways accordingly, embrace the new frontier
But I have a secret theory, just my proverbial two cents
I’m not sure that the babies are reading up on the evidence!

Dietze M (2001). A Re-Evaluation of the Mechanism of Labour for Contemporary Midwifery Practice. Midwifery Matters 88: 3-8.

Walshaw CA, Owens JM (2007) New ultrasound evidence shows that the accepted understanding of breast anatomy and the mechanics of breastfeeding are not correct: therefore should the advice on breastfeeding management be changed? MIDIRS Midwifery Digest 17(4): 570

woman by carinemily via photopin cc