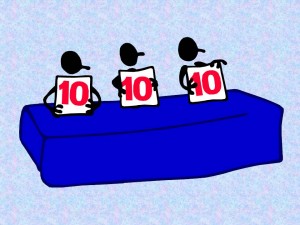 It is now more than sixty five years since Virginia Apgar created the scoring system that led to an increased focus on babies in their critical first moments (Apgar 1953). It led to her being honoured on a postal stamp and posthumously inducted into the US Women’s Hall of Fame. Perhaps more importantly, she is continually honoured by the many parents who want to know three things about their babies; sex, weight and Apgars, which sometimes get compared in the same way that, sixteen years later, they will compare GCSE results.

I must admit I had assumed that Dr Apgar herself had devised the appearance-pulse-grimace-activity-respiration bit so that we remembered her name, but she was clearly more humble than that: someone else created the mnemonic later. How handy, then, that her name had the same number of letters as the things needing to be scored; anyone else wanting to be similarly remembered should make sure they match the number of items in any tool to the number of letters in their name!

While it is important to honour the woman who created Apgars ~ not least because she became prominent and influential at a time when few women even attended university ~ there is also a need to consider whether Apgars remain useful. On the plus side, Apgar scoring is simple, requires no technology, and, as was the primary intent, focuses attendants on the newborn, enabling a quick and standardized assessment of neonatal condition. It does not cause the baby any direct harm, although there are suggestions that, when it was introduced, a self-fulfilling prophecy developed as physicians used a low Apgar to make the decision to do little to help babies born in poor condition (Fox 1994).

Criticisms include the fact that Apgars are incredibly subjective. Apgar herself noted in 1966 that different people scored the same baby differently.  It doesn’t measure small changes, and the aspects measured are inter-related (Fox 1994). There is also the question of whether a baby’s colour should be given the same weighting in the score as the baby’s heart rate, where the latter is arguably more important. Contrary to what was once believed, it is not a good measure of long-term morbidity or mortality (Ruth and Raivio 1988), and can differ according to factors like gestational age (Behnke et al 1989).

Given this, and the fact that the original aim of focusing attendants on the baby’s condition has been more than achieved, is the Apgar score flexible enough to accommodate our growing knowledge around birth?  The most obvious example with which to illustrate this question is that of babies born in water. In her waterbirth workshops, Lucyann Ashdown talks about waterbirth being ‘less stimulating physiologically’ (personal correspondence 2005), and midwives often discuss the fact that babies born in water don’t often get a one-minute Apgar of more than 8 or 9. They may be happy, but tend not to struggle or cry, which may reduce their score. Does the fact that the “G” of Apgar stand for grimace relate to an assumption that babies are often highly stimulated and sometimes cross at birth? Does this in turn reflect the context of the age in which the tool was developed; a context which might no longer be relevant today? Find out about the ‘Aqua Apgar’ here.

Similarly, babies who are born after vaginal breech births often take longer to ‘pink up’ and recover than babies who choose the more common cephalic presentation, yet the Apgar score again doesn’t take this into account.  Experienced practitioners are aware of issues like this that can affect the Apgar, yet the score itself often stands alone and there is little space for the context to be taken into account. Some midwives who attend waterbirths say that they “use their common sense” with Apgar scoring, which might solve the problem of parents thinking their baby has a less than optimal score on their first test, but otherwise only further highlights the subjective nature of this tool and also raises some difficult questions when we consider that Apgars are often used as key outcome measures in research studies.

Does the Apgar score continue to serve a purpose in normal birth?  Modern midwives would assess the need for resuscitation with or without an Apgar, so perhaps we actually use this less than we think. It is helpful when we want to give a quick assessment to someone who has just entered the room to help resuscitate a baby, but perhaps the Apgar is one of those things which was incredibly useful in its time, but which becomes less helpful as our knowledge and understanding moves on. Maybe the time will come when somebody thinks up a more creative and flexible alternative. If they do, let’s just hope they too have a short name!

If you’re a midwife or other birth worker who enjoys unpacking knowledge and practice and debating birth wisdom, come and join Sara and colleagues from all over the world in one of our online courses!

← Evidence for the purple line…
Could maternal body slope be key to protecting babies? →