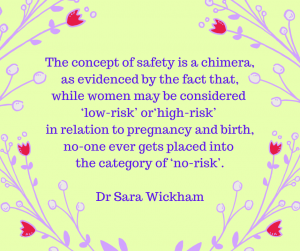 In 2010, a controversial meta-analysis of home birth (Wax et al 2010) received sharp criticism from many groups and individuals around the world. It was, at the time, simply the latest in a line of (in)famous publications claiming to show low-tech birth choices in a poor light yet which, upon analysis, were found to contain serious methodological flaws that render their findings neither robust nor reliable.

I originally wrote an article with this title following the publication of that paper. A decade later, the issues that I wrote about are continuing. Not just in relation to place of birth, but also with regard to questions about whether and when women should be offered interventions such as induction of labour, prophylactic antibiotics and fetal monitoring.

In common with some of the other studies in this category, and many more than have been published since, Wax et al’s (2010) findings received a significant degree of attention from the mass media in several countries. This coverage included and fuelled arguments about whether women should be able to choose options that may not be ‘safe’ for their baby.

But who defines ‘safety’, and what does this really mean?

Proponents of the technocratic approach to childbirth (and it is not ideal to talk about complex paradigms in stark and opposing ways, but simplicity does have advantages when you have limited space in which to write) have long used the notion of risk as a way of controlling women’s choices and actions:

’The question of risk has been a constant reference point for obstetrics whenever there  has been a controversy over who should control the birth process, women or medicine.’ (Murphy-Lawless 1998:21)

As Jo Murphy-Lawless (1998) and other sociologists such as Ann Oakley (1980) have long noted, the argument that childbirth should be medically controlled is based on two linked claims. Firstly, the claim that childbirth is risky, and secondly that the technocratic approach to childbirth – which includes ongoing screening, monitoring and measurement along with interventions to address any deviations from the norm – reduces that risk. The studies that have evaluated this claim, however, consistently fail to demonstrate that this approach is effective.

The process of debating research is an important element in the way that knowledge grows, and it occurs throughout all disciplines.

What is different as far as this kind of research is concerned is that the consequences of its publication – in contrast to, say, a controversial study about climate change, or one that overturns traditional understanding of the best way to cultivate a particular type of blueberry – may include measures which attempt to limit the choices that individual women are able to make.

In general, it is much easier to raise concerns about risk than to prove safety. Because of this, the positioning of risk as the enemy (which we can then use tools and technologies to fight and beat), has become a most effective means of controlling birthing women. Those who want home birth and other low-tech ways of birthing to continue to be an option for women are on the back foot, because no-one can prove that home birth is totally safe.

No study within the field of maternity care has ever shown, or will ever show, that a particular option can offer a guarantee of absolute safety, including hospital care with every intervention known to womankind.

This is because human life does not come with a guarantee and nothing will completely eradicate the possibility that something may go awry in any situation or context. The concept of safety in this context is a chimera, as evidenced by the fact that, while women may be considered ‘low-risk’ or ‘high-risk’ in relation to pregnancy and birth, no-one ever gets placed into the category of ‘no-risk’.

The nature of research itself means that it is possible to infer much more than can ever be proven, and this again makes it far, far easier when undertaking research to raise the possibility that something may be risky than to prove that it is safe. Scientists understand that this is the case even with well conducted research. And yet there is a continued trend within the technocratic birth world towards publishing poorly conducted research – what some have termed ‘bad science’ – and then making unwarranted claims about its implications. In the worst case scenario, these claims over-sell the quality of the research and make gratuitous assumptions about its applicability in different contexts. Then, often with the help of the mass media, these are converted into calls to prevent certain (or sometimes all) women from making particular choices.

Bad science and a slippery slope

The Wax et al paper (2010) contained a number of serious flaws and, while some defended its value, others equally quickly relegated it to the category of bad science. But similar papers continue to emerge. Because people have different beliefs about birth, there is probably no chance that we will ever all agree and in some ways it may be better that we do not, for debate fuels knowledge and understanding. However, to suggest that choice may be given or taken away according to somebody else’s application of a concept as fragile and debatable as that of risk may be the beginning of a very slippery slope.

Ultimately, no matter what one thinks about the value of a particular piece of research, the more serious issue concerns the difference between the value of research findings and the way these are used to limit women’s options. I believe that we have a duty to do everything we can to challenge the idea that tenuous and contested concepts of risk and safety can continue to be used as a means of controlling women and preventing them from making decisions about their bodies.

Oakley A (1980). Women confined: towards a sociology of childbirth. Oxford: Martin Robertson.

Oakley A (1984). The captured womb: a history of the medical care of pregnant women. Oxford: Robertson.

Tew M (1985). Place of birth and perinatal mortality. Journal of the Royal College of General Practitioners 35:390-94.

Wagner M (2006). Born in the USA: how a broken maternity system must be fixed to put women and children first. Berkeley: University of California Press.

← Sara Wickham’s books are now available on Kobo!
Self-care: caring for ourselves… →